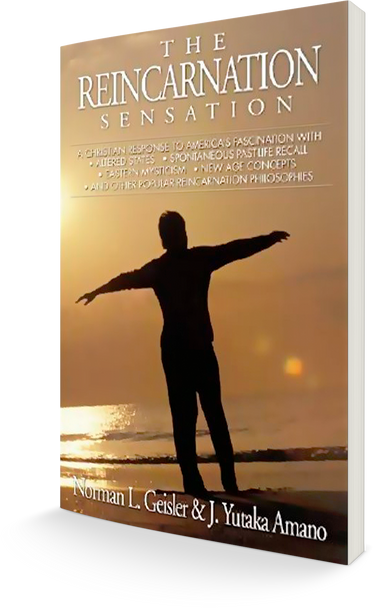 One in every four Americans believes in reincarnation according to a Gallup poll. Why does our society have such a growing preoccupation with death and "past-life experiences"? Authors Norman L. Geisler and J. Yutaka Amano conclude that among the reasons for the popularity and influence of reincarnation philosophy are the rapid rise of the New Age Movement and society's fascination with Eastern thought. They examine cases of spontaneous past-life recall and point out alternative explanations for these phenomena. Ultimately, 'The Reincarnation Sensation' shows that the doctrine of reincarnation is contrary to the Bible's teaching about eternal life and incompatible with the Christian faith.

J. Yutaka Amano has served as a research associate for Probe Ministries and holds a Master of Theology degree. He previously collaborated with Norman Geisler on the book 'The Religion of the Force'. OOP16, religions, world religions,new age, reincarnation, The Reincarnation Sensation by Geisler and Amano

Infiltration of the New Age

MSRP: $17.99
Now: $5.00
Was: $9.99
A popular and concise critique of "New Age" beliefs that have infiltrated the culture such as Reincarnation, Self Esteem, Holistic Health and Magic.   CLEARANCE! Paperback: 150 pages...

Infiltration of the New Age

MSRP: $17.99
Now: $5.00
Was: $9.99
A popular and concise critique of "New Age" beliefs that have infiltrated the culture such as Reincarnation, Self Esteem, Holistic Health and Magic.   CLEARANCE! Paperback: 150 pages...

MSRP: $33.00
Now: $21.99
Was:
Introducing our first apologetics curriculum! By: Frank Turek and Chuck Winter   A companion curriculum to be used with Norman Geisler and Frank Turek’s best-selling book I Don’t...

Five Questions No One Ever Asks About Gay Rights (MP3 Set)

MSRP:
Now: $5.98
Was:
5 Questions No One Ever Asks About Gay Rights Implementation of same-sex marriage is eroding religious and political freedom across the globe. (In this program Frank even shares how he...

Counter Culture Christian: Is There Truth in Religion? (DVD)

MSRP:
Now: $12.95
Was:
In this first show in the new "Counter-Culture Christian" series, Frank refutes relativism (postmodernism) and shows that truth in religion is objective and can be known. He answers questions...

MSRP: $5.95
Now: $1.99
Was:
This seminar will peel away the facade of "political correctness" that "all religions are equal and share the same common values." What makes Christianity unique among all the World's...

The 5 Most Consequential Questions T-Shirt (men's)