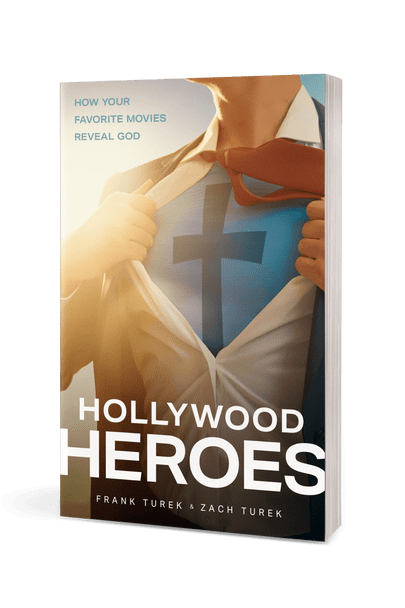 How Your Favorite Movies Reveal God

When the Apostle Paul was in Athens in AD 51 trying to reach the Greeks with the Gospel, he didn’t quote the Old Testament as he did with the Jews.  He found a bridge to the Gospel by quoting their own poets and referencing beliefs in their own gods.  In effect, Paul used the stories of his hearers to bring them to faith.

That’s what authors Frank and his son Zach are trying to do in their new book Hollywood Heroes:  How your Favorite Movies Reveal God.  Many young people (and old) are enthralled with the heroes and storylines they see in blockbuster movie franchises such as, Captain America, Iron Man, Star Wars, Lord of the Rings, Batman and others.  They are enthralled because those movies speak to a deep desire people of nearly all faiths have: to be rescued from this world of pain and suffering and be taken to a place of bliss.  That’s exactly what Christianity promises.

Following the lead of Paul, Hollywood Heroes uses the stories and desires of today to point people to the greatest story ever told and the world’s ultimate hero—Jesus of Nazareth.  It also provides a fun way to get kids more interested in God and Christianity.  They’ve weaved apologetics, theology, and biblical life lessons into the book as well.  So hopefully, you will use it to bring people to Christ and to help deepen their walk with Him.

We are entranced by stories that take us to a world where heroes fight evil and sacrifice themselves for a greater good because we long for our world to be free from pain, suffering, and struggle. That’s the real hope and promise of Jesus—when He returns to set things right.

In Hollywood Heroes, you’ll see how:

MSRP: $15.99
Now: $10.99
Was:
If you think atheists have reason, evidence, and science on their side, think again! Award-winning author Dr. Frank Turek (I Don’t Have Enough Faith to be an Atheist) will show you how atheists steal...

MSRP: $18.99
Now: $12.99
Was:
Why Are You A Christian? J. Warner Wallace has asked this question in churches across America over the past several years, and the answer he gets is often disappointing; it’s almost always...

MSRP: $9.99
Now: $8.99
Was:
by J. Warner Wallace and Susie Wallace with Rob Suggs Are Your Kids Sure Christianity Is True? In this second installment of the Junior Cadet Academy, a group of young aspiring detectives must...