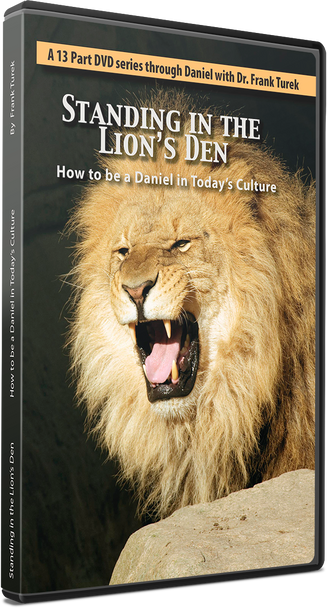 Standing in the Lion’s Den: How to be a Daniel in Today’s Culture

Join Dr. Frank Turek on a wild ride through the book of Daniel.  You’ll not only dive deeply into some of the most famous stories in the entire Bible, you’ll learn practical ways to emulate one of the greatest leaders in all of history.  The 13 fascinating lessons are:

Session 1:  Remaining Unstained by the World

Session 3:  Standing in the Fiery Furnace

Session 5:  The Handwriting on the Wall

Session 6:  Daniel in the Lion’s Den

Session 7:  The Beast Judged by the Son of Man

Session 8:  Truth will be Thrown to the Ground

Session 9:  An Incredible Prophecy about the Messiah

Session 10:  Was the Temple Really Where the Dome of the Rock is Now?

Session 12:  The Resurrection and Coming Rest

Session 13:  What’s Wrong with the World (and what can you do about it)?

In addition to the book of Daniel, Frank recommends that you supplement this study with an insightful book by Dr. John Lennox called Against the Flow: The Inspiration of Daniel in an Age of Relativism.

Each episode is about 58 minutes.

What You Were Made For: Complete 9-part DVD SERIES

MSRP:
Now: $65.00
Was:
An exciting 9-week study! BY FRANK TUREK & TED WRIGHT “The most important thing about a person is what comes to your mind when you think about God,” said A.W. Tozer.  Why did...

MSRP: $54.95
Now: $49.95
Was:
Miracles: The Evidence Did they Occur in Bible Times? Do they Occur Today?      The modern skeptical mind is set against the possibility of miracles, which means Christianity is...