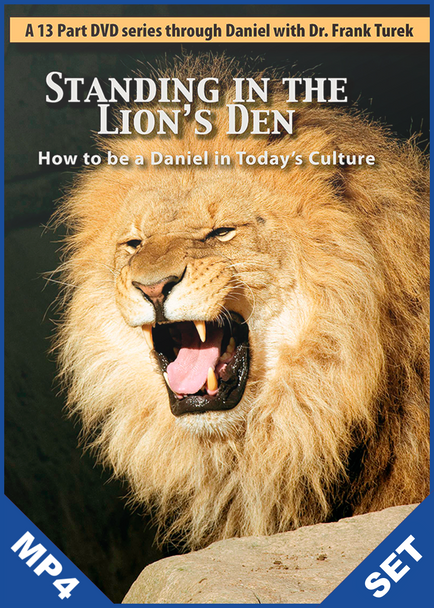 Standing in the Lion’s Den: How to be a Daniel in Today’s Culture

Join Dr. Frank Turek on a wild ride through the book of Daniel.  You’ll not only dive deeply into some of the most famous stories in the entire Bible, you’ll learn practical ways to emulate one of the greatest leaders in all of history.  The 13 fascinating lessons are:

Session 1:  Remaining Unstained by the World

Session 3:  Standing in the Fiery Furnace

Session 5:  The Handwriting on the Wall

Session 6:  Daniel in the Lion’s Den

Session 7:  The Beast Judged by the Son of Man

Session 8:  Truth will be Thrown to the Ground

Session 9:  An Incredible Prophecy about the Messiah

Session 10:  Was the Temple Really Where the Dome of the Rock is Now?

Session 12:  The Resurrection and Coming Rest

Session 13:  What’s Wrong with the World (and what can you do about it)?

In addition to the book of Daniel, Frank recommends that you supplement this study with an insightful book by Dr. John Lennox called Against the Flow: The Inspiration of Daniel in an Age of Relativism.

Each episode is about 58 minutes.

The Footsteps of Jesus In Israel DVD mp4 Download

MSRP:
Now: $9.95
Was:
The Footsteps of Jesus In Israel with Dr. Frank Turek   Join Frank as he leads you to the most dramatic places in the life of Jesus.  From His birth to His Resurrection, you'll see and...

MSRP:
Now: $15.95
Was:
2 Part Series.   Frank Turek investigates the greatest global competitor to Christianity: Islam. He answers many of the most pressing questions, including: How...

MSRP:
Now: $15.95
Was:
How many times have you heard "You can't legislate morality!" or "Christians ought not be involved in politics?" Watch Frank explode those myths in this eye-opening two-part series which...

MSRP:
Now: $9.95
Was:
How Old is the Universe?   MP4   The age of the universe:  it's one of the most controversial topics in all of Christianity.  But according to Dr. Frank Turek, if we take...

MSRP: $74.99
Now: $62.95
Was:
Video Download: Stealing From God: Why Atheists Need God to Make Their Case (10 Hours) with Dr. Frank Turek What if your best reasons to doubt God show that He actually...

MSRP: $32.00
Now: $23.99
Was:
Introducing our first apologetics curriculum! By: Frank Turek and Chuck Winter   A companion curriculum to be used with Norman Geisler and Frank Turek’s best-selling book I Don’t...